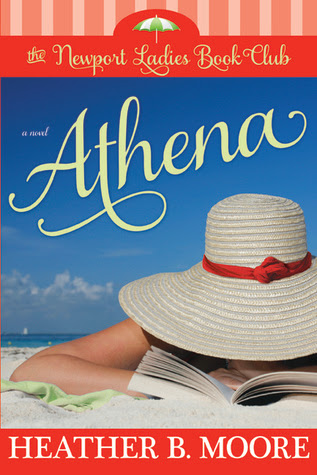 Athena is a self-proclaimed bachelorette—it’s better that way—no one gets hurt. But when tragedy strikes, Athena realizes friendship and love is the only way she can pull through, and she must, for the first time in her life, risk opening her heart.

Athena is the fourth book in the Newport Ladies Bookclub series. If you are familiar with these books, you know that they are each stand alone novels that follow a group of women who have met at a book club.

Athena is the president of her own company. She is in her thirties, and has a comfortable, casual dating relationship with Karl. But when he wants their relationship to become more serious, she ends it and resigns herself to the fact that she is just not the right kind of girl for married life. She doesn't need anyone, and after watching the way her father dictated her mother's life, she is skittish about letting anyone close to her.

That was until she met Grey and started thinking that he was somebody she could get serious with. Grey is a sensitive character without being whiny or lame. I connected with him right away, and I also loved that he isn't perfect. He is a great romantic lead, because he's struggling with the idea of being close to someone just as much as Athena is.

When her mother dies, Athena finds herself relying on Grey to help her through not only her mourning, but the trials and complicated feelings of caring for her father.

I loved Athena. The characters were so complex and dealt with their realistic problems in a realistic way. It is beautifully written with a wonderful story, and by the end, I felt that the characters had changed and grown, and it was satisfying as far as character arc. There were parts where I teared up, and also places where I laughed out loud.


You can read more about the series: http://thenewportladiesbookclub.blogspot.com
Posted by Jenny Moore at 12:25 PM