What is a Writer's Journey? As I am about to take another big step in mine, I wanted to look back at my own journey.

If I was to pick one word to represent this experience, it would be humility. Based on the praise of my parents and teachers, I had always thought I possessed quite a lot of talent when it came to writing. I was constantly reading things, and thinking (often aloud) that I could have done it better. I was quick to criticize others and what they had done, and when I finally decided that I wanted to write my book, I knew that it would have no problem becoming a best seller. I mean, my writing teachers in college and high school had always told me I was fantastic, and my best friend, Josi was a writer. If she could do it, so could I.

I told my husband I was going to write a book, and he promptly bought me a laptop. I told everyone that I was writing a novel, then I'd open my word document and stare at it for hours, not knowing where to begin. When I mentioned to Josi that I was working on something, and she invited me to her office one night a week for a write night. So I took my laptop and stared at my word document for hours at write night.

Getting my chapter feedback was a huge eye-opener. Not only did the chapter stink, but there was so much I didn't know about point-of-view, dialog tags, emotional cues, setting and a million other things.

I was discouraged, but if there's one thing I know how to do, it's research, so I dug into writing books, attended conferences, watched lectures online, signed up for e-classes and over the next three years, with the help of this critique group and my writing partners, Josi and Nancy, I worked and edited and wrote and deleted and revised until I had something I was truly proud of. A finished novel which I was certain had to be the greatest story ever told. The characters were fantastic, the love story touching, the settings unique--everything about it was wonderful. I traveled to the middle east, studied falconry, went cattle branding with my brother in law, interviewed snowmobilers, learned about terrorism, and felt like this book had everything I could possibly give to it.

I signed up for a pitch session with an editor, and spent the next four months perfecting my query letter, pitch and synopsis. I read through the manuscript so many times, changing words, switching around scenes, tightening sentences, until I had the whole 75,000 words nearly memorized.

I pitched to the editor who told me he loved the story, and I knew I had it in the bag. Obviously. I'd worked hard, polished it up, researched like crazy, and don't forget, I've got all that talent.

So, what should I do in the meantime? I'm obviously on my way to fame and fortune, unlike those people who had to submit numerous times and deal with rejection after rejection. But, I didn't want to stop going to my critique group or write nite with my friends...so, what was the solution?

Obviously starting another book. Perfect. Why hadn't I thought of this earlier? Of course, once this first book was published, they would be begging for my next masterpiece. So, I started again, finding it much easier to plot my storyline, flesh out my characters, and ratchet up the conflict. I did more research, traveling to a cattle ranch, going to Arizona, reading about Mexican drug cartels.

This story was already better than the first, I could see that I'd grown. Wouldn't the world love these books?

Then something happened that hit me like a mack truck. My first book was rejected. After seven months of being certain I was well on my way, it felt like my dream was shot out of the sky. And I know I'd heard from other people that rejection is hard, it's part of the process, but I had no idea how bad it would be. I hadn't imagined that this book could possibly be rejected. There are seriously no words to describe how badly it hurt. It was devastating. I was totally blindsided. and all I could do was cry. Ridiculously and embarrassingly. For days. Uncontrollably. If you've never experienced this, don't even try to understand it, because I look back on it, and it still hurts. That first rejection is terrible. And worse than that, it was just like everyone had told me. I was having to submit and be rejected, and work harder and grow, and not succeed the first time. It was definitely a blow to my pride.

But, my writer friends understood. My husband still believed in me, and even though I didn't think I'd ever get over it, I did.

And since then, I've submitted and been rejected numerous times. Each one still stings, but it's part of the journey, ya know? I'm still working, studying, learning, growing. And I have friends and family to cheer me on. I have years of experience that I can learn from.

Those rejections have been hard, critiques of my work are hard, realizing I've got to work as hard as everyone else, and finding out that I'm not the most talented, amazing writer like I'd thought I was is hard, too.

But hopefully, this is part of the journey, it's something I'll look back on and think how it made me better. Because I have gotten better. Maybe not good enough, yet, but better. I can look at other writers now, and hear their stories and realize how hard they've had to work. How they've been rejected and knocked down, and gotten back up time and time again.

I heard a quote by Dan Wells, actually his brother, Rob told it to me.

"Everyone has an idea for a book. Everyone says that one day they're going to sit down and write the Great American Novel. The difference between writers and everyone else is that writers actually do it."

It is fantastic advice, and I'm going to continue to follow it. Nobody gets better at anything by just sitting around knowing they could be great at something. We all have to learn through triumphs and disappointments.

I have just finished my fourth novel, and am minutes away from clicking the "send" button to try again, and I'm every bit as apprehensive as I was the first time. But each one of these books shows my progress. They are getting better. I am getting better. I found myself reaching deeper than I did before, trying new things, laughing, crying, and at times, just gutting out the words to make this the best I can. And it is my best. But it's not as good as the next one will be, and that one isn't as good as the ones that will follow. Because that's what makes it a journey.And when it finally does happen, I can look back and realize how much better it feels, because I will have earned it.

It's been a "Wild West" sort of week for me, and it's made me think as I read these two books...Why do we know all the bad guys' names, and hardly any of the good guys? Why are the outlaws so much more interesting than the regular people that just go about their lives perfectly legally, not hurting anyone in the process? 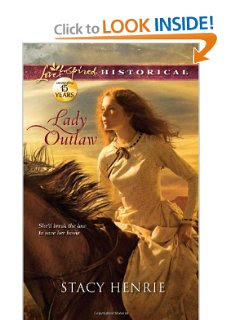 It must have been then, like it is now, we just love those bad boys, don't we?
Stacy Henrie's book is so fun and sweet enough that you wouldn't have to worry about giving it to your daughter--or your granny. It's a fun twist to have the heroine be the outlaw. It has some great romance, some real life-lessons for the heroine, and by the end, I was completely in love with the hero. And that's what we want, right? 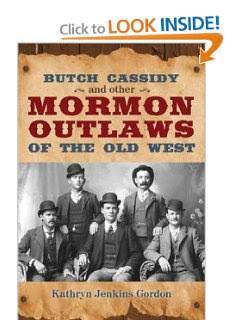 Then, I read a non-fiction book about the same time period, same places, and found that it kept my attention every bit as much as the romance. Kathy Gordon's book is completely fascinating. I loved hearing about the "gentlemen" outlaws. Their stories, their planned bank robberies, escapes, hideouts, all of it was written in such a way that I found myself swept away in the world of the wild west, just as much as with a novel. There were great pictures, too. Which I think is absolutely the most fun thing--to see what the baddies looked like. Talk about a perfect Father's Day gift. 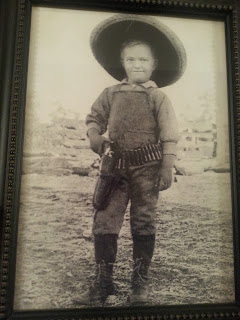 I think the love of the outlaws and their legends is in my blood. This is a picture of my grandpa, on his family farm in Mexico. On the back of the original, his mom had written "Pancho Villa." Pretty cute, don't ya think? I guess even back then, the banditos were the guys kids imitated.