Heir to power by Michele Poague

Don't actually click to look inside, I borrowed the picture from Amazon.com. 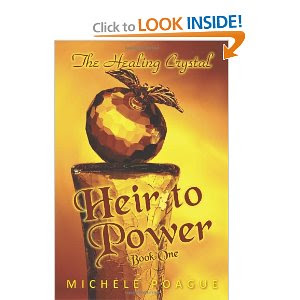 The colony of Survin has been hidden for centuries, protecting an ancient religious artifact called the Healing Crystal from men who would steal or destroy it. Kairma, heir to the Crystal, is destined to mate with the handsome Naturi and become the leader of the reclusive colony, but she is too young to realize the peril soon to arrive. At sixteen, Kairma is too young to realize many things ....
Kairma would rather go spelunking with her brother and his best friend than study ancient medicine and religious laws, but the discovery of a tomb containing ancient artifacts leads Kairma to question her religion and the true nature of the Crystal. To further complicate Kairma's ascent, a childhood illness has left her resembling a nearby race of men both hated and feared by the people of Survin. Because of this, Kairma's younger sister Kinter, who is in love with Naturi, believes she is the rightful heir.
Disease and infertility have decimated Survin, but bigotry and religious laws forbid the introduction of new members so things heat up when a traveling archeologist stumbles upon the reclusive colony and introduces a powerful new weapon. Forced into a larger world, the Survinees discover they hold an object of unimaginable power, a power other men covet, a power that might save or forever damn the human race.

I have to admit, it took me about 200 pages to feel really interested in the characters.  The book doesn't follow traditional pattern (hook, twist, climax, etc) and I wasn't quite sure exactly what the conflict was.  There was also a lot of world building, which was done really nicely--woven throughout the story.

I felt lost for a good part of the book while I tried to figure out where I was.  Africa?  Ancient America?  Post-Apocalyptic world?  Another world entirely.  I know this was done on purpose, so as I reader I could "put the pieces together."  And I really enjoyed that.  I won't give any spoilers, but once I did figure out when (approximately) and where the story took place, I liked it a lot more

Basically, there are a few main characters.  Kairma is the future leader of her people.  The birthright is handed down from Mother to Daughter and you guessed it, she is next.  She is an insecure girl because of a disease she contracted as a kid that turned her hair and skin (ala Michael Jackson) white.  Her apperance looks so much like the enemies of her people that she has a hard time gaining their trust.

Collin is her brother's best friend, and he is the only person in their small village that has any desire to see the rest of the world.  Everyone calls him a rogue.  A stranger comes into town and tells about the big city and Collin is dying to check it out.

Naturi is the most handsome guy in town and all the girls, especially Kairma's sister, Kinter love him.  Unfortunately, it's pretty much decided that he will be marrying Kairma, which is a major source of conflict with Kinter and Collin who is in love with Kairma.

The story was interesting.  There was some adventure and action, but most of it was centered on the village and their need to get some new people to marry, but at the same time, not let anyone know that they have the healing crystal.  They also have a rule that if you join the village, you can't leave.  In fact, nobody can leave, which makes Collin's goal to get the heck out of there almost impossible.  It also focuses a lot on the discovery of the big city and how the more modern ways can improve the lives of the mostly primitive villagers. Important to the world-building, but I am more of a relationship gal.  I wanted to hear more about the people and see them interact and figure out some of the more personal mysteries.

Typical to the first book in a series, there is not a lot of resolution as to who ends up marrying whom, and we are left knowing that more bad guys could pretty soon be on their way, as well as some questions as to the intentions of the white cave dweller guys.

I wanted a few more answers, but I guess that's what the next book is for, right?

All in all, a good read, a little long and technical, but a really intriguing premise.